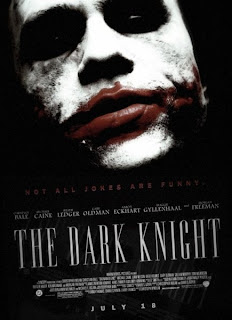 I have seen Batman: The Dark Knight twice already, but something within me urged me to go see it again before it disappears from the big screen. It was a desperate kind of nagging, as if my life will always be slightly incomplete if I do not savoir this great movie at least one more time. And watching it on DVD would just not be the same.

Since I missed out on the play I wanted to see to celebrate my first pay check at the new job, I decided that I will treat myself to a visit to the Imax-theatre, there to watch The Dark Knight again. It was well worth the hour-and-some travel .

This is my ode to The Dark Knight...

It is such a difficult thing to say, but this is probably one of the best films I have ever seen. As far as storytelling goes the script is magnificent. Nothing is wasted. Every element introduced has a purpose. The writers (Christopher Nolan and David S. Goyer) should get an award, and the screenplay adaptation (by brothers Christopher and Jonathan Nolan) were superb. I just cannot get over the neatness of the plot. It is extremely well thought through. Not only is the story greatly constructed, but the themes are ever serious and worth contemplation. Unlike the superficial attempts of many other Superhero plot, the moral dilemmas in The Dark Knight engages the audience, and force us to question our own moral standpoints.

The cinematography is emotive and adds to the narrative. The editing is great. Only at my third watch did I see the smallest of possible continuity error(s), but it is so inconspicuous that it isn’t worth mentioning. The lighting is used with great skill, highlighting the themes of light versus darkness, and foiling the grey in-between world of the vigilante – the one that has to crossover from the realm of light to the realm of darkness, in order to fight evil in its own backyard.

The sound is nerve-wracking. Every so often there is this strange hum, sometimes it is a single violin note, other times an eerie mechanical drone that increases in frequency. The hum usually accompanies the Joker-character (played by the late Heath Ledger), which just makes all the hairs on your body stand on end – the effect is more powerful than any of the screeching gimmicks I’ve experienced in typical suspense-horror movies. It never tries to shock the audience. Instead it starts softly and increases in volume as the suspense increases.

And the acting is superb. Heath Ledger’s performance as Joker is really good. His unfortunate death does not need to add any sentimental hype to his acting – his performance stands as a testimony unto itself. Christian Bale is well known for his indulgence in the characters he portrays, and it shows. Not the mention the ever great Gary Oldman, who plays his role so well that it is only with great effort that one see Oldman, behind the persona he gestalts.
This is probably the best superhero movie ever made.

The director, Christopher Nolen, has established himself as a splendid director who knows how to keep the audience in suspense. He has become without a doubt one of my most favorite directors.

What Batman: The Dark Knight is not, is a feel good movie. Neither is it perfectly in step with the comic books, which might disgruntle some "purist", to quote a Batman-friend of mine.

Sanko, I'd be interested in your take on a theory I've heard about the Dark Knight. I haven't seen the movie myself so you can let me know if this idea is ridiculous or not.

Do you think the writers intentionally were making Batman analygous to George Bush... fighting terrorists (the joker is called a terrorist, right?). And in fighting the terrorists, Batman has to make some very tough decisions to the point that they ruin his standing in the community and his legacy. In the end he makes the tough decisions for the safety of the people he has sworn to protect. Do you see where I'm going with this?
Is the storyline analygous to the war on terror or is this BS?

I do not think that analogy can stand up to scrutiny. The Batman stands outside of the law as a vigilante from the very beginning. He is not one of the political figures in the film.

There is one thing that might be analogous (and which I found disturbing): Batman creates a b Big Brother device using cellphones to "listen to all of Gotham City" in order to find the terrorist Joker. The device is put in the care of the very moral Lucius Fox, and destroyed at the end when it is no longer needed.
Are we to believe that this is was George Bush is doing? When will that time come when the government no longer need their Big Brother devices?

I think if you put your mind to it, you could find analogies, but they will most likely be forced.

The storyline may very well be an analogy for the war on terror in general, but not for specifically for the current American one; and I doubt very much that it was written as a defence for the Bush Administration.

Unlike some other superhero movies (such as Spider-Man), Dark Knight did not come over as overly nationalistic.