You know that this gun-law thing is going crazy when you see news like this: 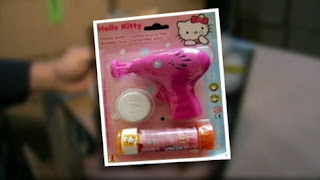 By the way, that girl blowing bubbles was ordered to get psychological evaluation during her suspension. For blowing bubbles! Get this, this toddler, speaking about shooting another kid with bubbles with her pink Hello Kitty Bubblegun is accused of "terrorist threatening". And I thought I had a master's degree in Creative Writing! Seriously, it is so bizarre it ought to be part of some sci-fi short story anthology. The idea that a toddler blowing bubbles is equated with terrorist activities is warning us of a civilization gone mad. I don't know if I should laugh at the absurdity or cry at the ludicrousness.

Posted by Skryfblok at 19:37 2 comments: Links to this post


First there's lights out, then there's lock up
Masterpieces serving maximum sentences
It's their own fault for being timeless
There's a price to pay, and a consequence

-- From "All the Rowboats" by Regina Spektor

Posted by Skryfblok at 16:10 No comments: Links to this post

Apart from my regular training, last week Friday I had another martial art photo shoot. Unlike the previous photo shoot I did last year that was part of an art project, this one was for marketing purposes.

It was great fun. The other male model I worked with was in awesome shape and in one photo I am supposed to be the coach teaching him how to use the kettle bells, but considering his good form it looks more like he is the coach and I'm the lanky student following him. 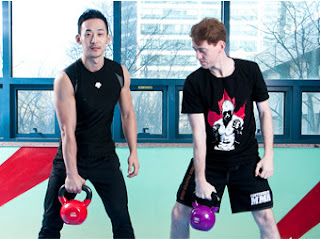 Apart from Taekwon-Do and cross-fit, we also did some MMA modelling, which includes stand-up fighting and ground work.

Tonight (Thursday night) I had a strange but interesting meeting with two Korean Taekwon-Do champions. The one is a three time World Taekwon-Do Champion and one time Asian Games champion, and the other a 1992 Olympic Champion. They both immigrated to the United States where they run very successful Taekwon-Do schools, but one has now returned to Korea after he had finished his doctorate in Physical Education. He has been offered a tenure position at Dongguk University here in Korea and will be teaching in the Taekwon-Do Department. It was a very interesting evening speaking to the two of them about their past experiences and their current endeavors.

Some thing I have not mentioned in this blog before is that I too will be commencing a PhD, and also in the field of Taekwon-Do. I've been accepted into graduate Taekwon-Do program here in Korea, where I will pursue my studies with a special personal focus on Martial Arts Philosophy. I will do this part time, as I'm still working full time at another university. It is going to require some hard work and lots of focus, but I'm sure I can do it by the grace of God.

Indeed, 2013 may just be the Year of the Martial Arts for me. Interestingly, a decade ago in 2003 I also had a martial art focused year when I moved to the small coastal town, Mtunzini in Zululand. There I spent my days studying martial arts. In the evenings I would either teach martial arts and fitness for an income, or go to the neighboring towns, Empangheni or Richardsbay, where I practised with then one of South Africa's foremost Taekwon-Do practitioners.
Posted by Skryfblok at 17:53 2 comments: Links to this post 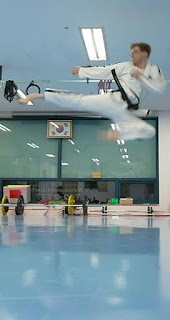 2013 kicked off (the pun is quite intended) with some martial arts training. On New Year's Eve I went to the Taekwon-Do gym to do some training. Afterwards I went to a jazz restaurant in Apgujeong, Gangnam with two friends where we had a rather expensive meal. Not ridiculously expensive considering the quality, but definitely not the type of place I will frequent. Having finished our meal and having my craving for live jazz music somewhat satiated, we moved to a coffee shop for hot chocolate. Such an intimate, quality type of heralding in the new year may be too boring for some people who considers the only way to start the new year is by drinking themselves until comatose -- not my idea of a good time. For me, sharing great food, great music, and great company while actually having intelligent conversation was a wonderful way to celebrate the year past.

New Year's Day started with me sleeping in then meeting "family" for lunch. In the afternoon I met some friends for martial arts training again. We worked on some advanced level break falling techniques and later self-defence reflexive drills. It was wonderful to train with two high ranking individuals with years of experience. After training we went for dinner and drinks. Again, an awesome way to spend the first day of the year: nice training, good food, great company. I hope that today was a reflection of how most of 2013 will be for me. That would be awesome!
Posted by Skryfblok at 18:43 No comments: Links to this post