My run in with a Snotkop fangirl

Two days ago I had my first run in with a fan girl. No, not of mine. This particular fan girl really dislikes me in fact. Actually she is a fan of the Afrikaans pop singer Fracois Henning aka Snotkop. (The name “Snotkop” is his stage name and literally translates as “snot-head,” but may loosely be translated as “punk.” I actually like the name, since it is an interesting play on words on the punk-pop genre he sometimes make Afrikaans covers of.) My run in with a die-hard Snotkop fan girl went like this:

A new person suddenly followed me on Twitter. I'm not particularly active on Twitter, so I'm not really sure why people I don't know would start to follow me. The more unusual thing was that miss “CALL ME CRAZY!! @ Mignon_Devitt” sent me a message, asking that I please follow her back. I didn't recognise any Mignon Devitt, and at first though it is a spammer; nevertheless, I decided to give her the benefit of the doubt and obliged. Almost immediately after I accepted her invitation she tweeted the following on her account:

She tagged me, then listed a link to a post I wrote on my blog in February 2010, adding “how could you write this about someone you don't know shit about?”, and finally tagged her idol @Snotkop_Henning.

So how did I upset poor miss Mignon Devitt so terribly? Well it turns out that in a post I wrote four years ago I criticised the lack of originality in the Afrikaans music industry, and I used Snotkop as an example. I pointed out that his hit song “Kry jouself by die werk” (“Get Yourself to Work”) at the time (early 2010) is a cover of The Offspring's “Why Don't You Get a Job?” and how the beginning of his song “Shut up en soen my” unabashedly borrows from Suzanne Vega's “Tom's Diner.” My point was that I was disappointed with popular Afrikaans music, because it wasn't very original. O, and I also may have mentioned that I'm not very impressed with Snotkop's voice either and think that a lot of his and similar mainstream Afrikaans music is superficial.

Now don't get me completely wrong. I'm happy that Afrikaans music is active, even in the genres that I do not really listen to. The survival of the Afrikaans language depends on it being a thriving cultural commodity, and if pop artists like Snotkop make it seem cool among young Afrikaans speakers, that is wonderful, as it would cultivate a sense of pride in the language. It is just that I'm saddened by the unoriginal, superficial quality of mainstream Afrikaans music.

After “CALL ME CRAZY!! @Mignon_Devitt” made her tweet in which she tagged me, her idol, and my blog link, she started to send me a series of private messages on Twitter:

HI! I have seen one of your blog posts about afrikaans music and you using snotkop as an axample and what you wrote was just plain tasteless
01:20 AM - 03 Jul 14


yes so maybe he has directly translated some songs! so be it! he is one hell of an artist! we as afrikaans people would prefer him
01:22 AM - 03 Jul 14


over many international artist! he knows what he is doing! he has thousands of fans and I will defend him! he is a great artist!
01:23 AM - 03 Jul 14


And she finished with a Snotkop quote in which he acknowledges that:

"I take songs and translate them into Afrikaans and try and bring them closer to Afrikaans culture so people can better connect with them."
01:29 AM - 03 Jul 14


None of this, of course, takes away from my argument that mainstream Afrikaans music tends to be unoriginal and/or superficial—and my lament on my blog post that:

“The truly unfortunate thing is there are many talented artists performing in Afrikaans so that we need not be satisfied with such low quality music. As long as people are satisfied with fast food, quality cuisine will not become the standard; it is similar with music. While people are drunk on cheap pop music, there is no room for quality original music, which need not be the case in Afrikaans music, as we do not suffer from a lack of original artists.”


So Snotkop has thousands of fans? Good on him. And I really do mean that. I'm happy that an Afrikaans artist can make a success in such a small market. But having many fans does not a great artist make. Justin Bieber has legions more. 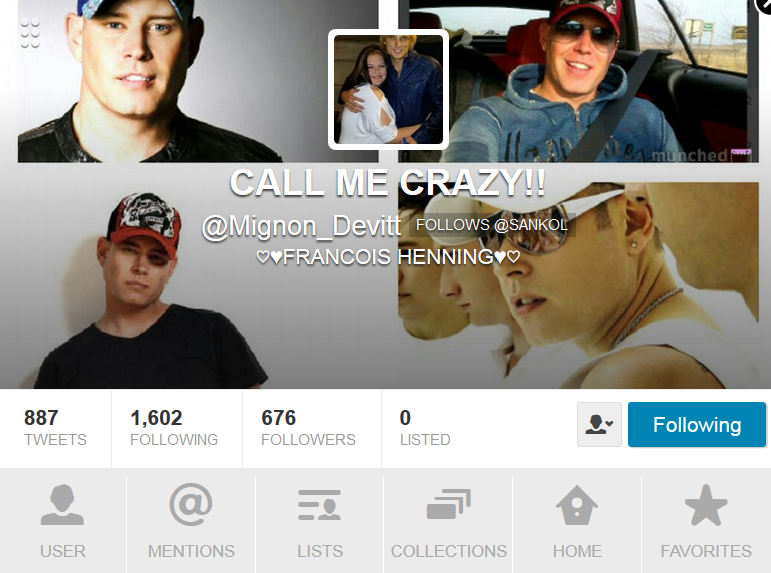 Turning my attention away from the South African music industry to the term “fan,” which is probably derived from the word “fanatic”, I must say that I'm intrigued by @Mignon_Devitt and the need she felt to defend her idol Snotkop from what she considered my terrible attack on him—in a post I wrote four years ago. She went through a lot of trouble, first by searching for a way to contact me, finding me on Twitter, following me on Twitter, asking me to follow her on Twitter, and then writing her tweet in which she linked to my—apparently—offending blog post, and tagged both myself and her idol @Snotkop_Henning, and then afterwards sending me a series of messages.


By tagging her idol @Snotkop_Henning in her tweet, I'm assuming she hopes that he will read it, that her intention is to impress him, to prove to him her devotion and loyalty, and how she's got his back—protecting his honour against this random blogger that wrote something about him in 2010.

I wonder if she did impress him. Or if he is oblivious to her. If he is such a hot shot artist with thousands of fans, he might be too busy—i.e. actually have a life—to read every little tweet about him. I'm pondering whether this is a case of a parasocial relationship, in which the fan has an imagined belief that they have a special bond with their idol, but it is actually a one-sided crush that may lead to Celebrity Worship Syndrome.

Also, I'm not sure if CALL ME CRAZY!! @Mignon_Devitt's attempt to call me out on Twitter in order to protect her idol Snotkop will have the desired effect. Her tweet just caused more people to read what I wrote, and what I wrote about was the lack of originality in Afrikaans music and I pointed out how Snotkop—in his own words—“take songs and translate them into Afrikaans.” Not only does he make Afrikaans covers of international bands such as The Offspring, but he also copies melodic parts from other songs for use in his songs, such as using parts of Suzanne Vega's “Tom's Diner” in his “Shut up en soen my.” Now more people who did not know that Snotkop “take[s] songs and translate them into Afrikaans” will read about him and my opinion on mainstream Afrikaans music's lack of originality. Because the Internet gives priority to sites that have links to it, @Mignon_Devitt has now made my blog-post more popular, which means more traffic will be directed to my page when they do an Internet search for “Snotkop”.

I have sympathy for CALL ME CRAZY!! @Mignon_Devitt—I have been quite smitten with a musician many years ago too. I “met” the Afrikaans cabaret diva Amanda Strydom on two occasions. The first time, I took a CD to be signed by her after a concert and when I got to the front of the line I was so awed to be in her presence that I couldn't even say my name. The second time I saw her after a show, I gave her some of my poetry naively thinking that she would be so impressed that she would turn them into songs, and I blurted out one of the most unoriginal things one could say as a fan: “I am your biggest fan!” To this day I am embarrassed to have acted like that. Thankfully I'm sure Amanda Strydom has forgotten about my silly behaviour—purely because so many other fans have uttered those same unoriginal words.

So CALL ME CRAZY!! @Mignon_Devitt, I empathise, and I'm sure I'd be offended too if someone said that Amanda Strydom doesn't have much of a voice. (Luckily for me and other Amanda Strydom fans such an accusation is unfounded.) I do apologise if my post caused you distress, but I also have the right to my opinion, just as you have the right to say that what I wrote is “shit.” May Snotkop realises what a wonderful, devoted, loyal fan he has in you.

By the way, I have nothing against Snotkop. He looks like a cool dude. And in all honesty, I haven't heard much (hardly any) of his music since I wrote that post in 2010. Maybe his music is more original and less superficial four years later. I don't know. I'm not a fan, so I'm not following his musical evolution.
Posted by Skryfblok at 14:25 No comments: Links to this post