I finally gone and did it. I bought a car.

It is a Hyundai Tuscani, also known as a Tiburon, or simply as Hyundai's coupe. It is a sports car; I got the 2002 model that is part of the second generation. They come in a V6, but mine is only a 2.0 liter four cylinder engine. And the best thing about it--the price: around $2000. Obviously it is a second hand car and I specifically looked for cars around this price range. I didn't expect to get a little sports car though. Surprisingly, it has done less than 85,000 km, and some nice basic features such as AC, power steering, power windows and mirror controls, and a sunroof. None of the cars I had owned in the past had such simple luxuries. 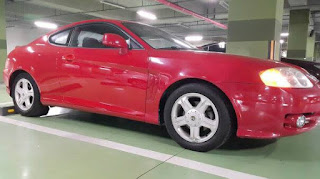 I've been living in Korea now for over 7 years. Korea's public transportation system is fantastic. There are buses and trains and taxis that can get you to every important spot. So, honestly, I really do not need a car. South Korea is nothing like South Africa where living without a car is a serious disadvantage. Why then did I get a car? The reason is two fold.

First, I've become tired of my regular commute. Although the public transportation is awesome, I simply don't live in a particularly convenient place. Or put differently, I live very conveniently close to my job. I'm literally 5 minutes brisk walk from my office. It is a great place to live considering work. Also the air is wonderfully fresh and my apartment is quaint and comfortable. However, I often go into the center of the city. At least twice a week do I go to a Taekwon-Do gym, and then there are other outings too. And here is where the inconvenience of where I stay come in. From my apartment, I have to walk 15 minutes to get to the bus stop, and then from the bus stop it is another 15 minutes to 25 minutes (depending on the traffic) to get to the train station. Once at the train station it is about half an hour to get to my Taekwon-Do gym. In other words, it takes me one hour to get there or more than an hour to get to most other places in town. If I can simply cut short that first part of the commute (walking to the bus stop, and from the bus stop to the train station) would be great. Furthermore, it really sucks having to walk in heavy rain or during Korea's freezing winters to that bus stop. With a car my journey would be so much easier. There is a parking lot right at the train station, so I'm hoping to do that--drive to the train station and then take the train from there. Obviously I can take the car into the city, but it is notoriously difficult to find parking space in Seoul.

Secondly, while the Korean public transportation is awesome, it still has its limits. It doesn't run 24 hours, and there are also places that is not easy to get to. I don't know how long I'll still be in Korea. It might be just for another year. My contract expires in the middle of next year and hopefully I'll be finished with my studies too. It might then be a good time to move on somewhere else if a good opportunity comes up. That means, I just have one more year to explore Korea, and I would love to do so by some other means. With a car I could go to the more obscure places,  to the places that are more difficult to get to--I might even go camping. So even if I only have a car for one year, I think it will still be a good thing.

I bought the car yesterday and have to admit that driving back home had me nervous. Although I'm an experienced driver, it is only on the left side of the road. I keep on getting in my car on the wrong side, being used to driving on the left side. Not just that, the Korean traffic laws are different from South African laws--there are many odd things that I still need to figure out. And then there is the language barrier. Most signs are in English, but some things, like for instance the tollgates do not have English signs. I have no idea which lanes are the drive-through electronic lanes, and which ones are the pay-on-the-spot lanes. These are not the type of Korean vocabulary I get exposed to in my day to day life in Korea. So there is still much for me to learn. It will be some time yet, before I feel fully comfortable on Korean roads.
Posted by Skryfblok at 09:15 3 comments: Links to this post