"and don't have any kids yourself"

People are often surprised when I tell them that I do not want children. There are many reasons. Here is one:

Posted by Skryfblok at 20:14 2 comments: Links to this post

Punctuation vs Memories of a Deceased Friend

So I was reading Jackass star Johnny Knoxville’s post on his blog about the loss of his friend and fellow Jackass celebrity Ryan Dunn who died on Sunday in a car accident and all I could think about while reading the post is: “Wow, this guy has excellent grammar and really knows how to use punctuation properly.” I think I’ve reached a level in my career as an English lecturer where I ought to become seriously concerned with my priorities. Surely someone’s use of punctuation is not as important as his memories of his deceased friend. Or is it the fact that I'm so used to seeing terrible grammar and use of punctuation amongst my students that when I see it applied properly it causes an endorphin rush in me? Either way, it's a cause for concern. What's happening to me?!

Knoxville's post is a touching tribute to his friend.
Posted by Skryfblok at 09:02 No comments: Links to this post

Posted by Skryfblok at 19:00 No comments: Links to this post

Some Korean Rock to Soothe the Soul

I finished grading papers and entering the final grades into the online system a short while ago -- just in time of the midnight deadline.

And now some good Korean Rock by KangSan-E to soothe the soul. The song's name is "Iguana". I've been listening to KangSan-E quite a lot since I was introduced to him by my dongsaeng. "Iguana" is one of my favourite songs at present. It makes me wanna sing-along, jump up and dance.

Posted by Skryfblok at 16:59 No comments: Links to this post

I'm sitting in my office grading a pile of Research Papers. It is 20:17; I need to be finished by midnight. It is a tedious activity, but there are moments that make the process quite interesting. For instance, the paper I am currently busy with considers the causes for Macbeth's tragedy. In one section that discusses Macbeth's reluctance to kill King Duncan, the student wrote the following sentance:

"Lady Macbeth persuades him by stimulating his manhood."

Working with L2 speakers sure has its perks!
Posted by Skryfblok at 13:21 2 comments: Links to this post

A couple of weeks ago I went paragliding. It was super. Time and money allow, I hope to do a paragliding course in August so that I can do it by myself and not have to do tandem flights. My pilot must have thought my quietness reflects fear, so he continuously asked me if I'm okay. I guess he is used to people shouting.  His concern turned out to be somewhat of a distraction to my enjoyment. What I enjoyed about it was the absolute serenity of being so high above the earth, "Ringed with the azure world", all quiet and peaceful, the trees a green kaleidoscope carpeted hundreds of feet below me. It was awesome and I definitely want to do it again. Some people in the group I went with felt sick, so unless you suffer from motion sickness, I highly recommend paragliding. 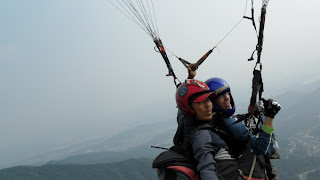 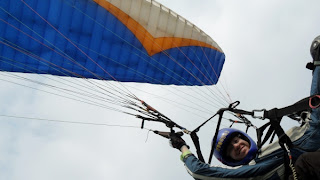 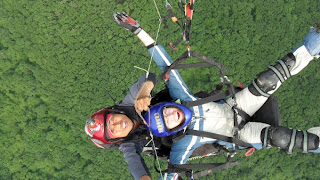 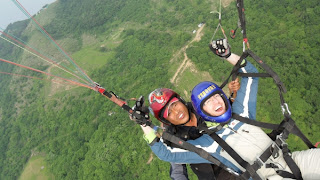 Posted by Skryfblok at 04:49 3 comments: Links to this post 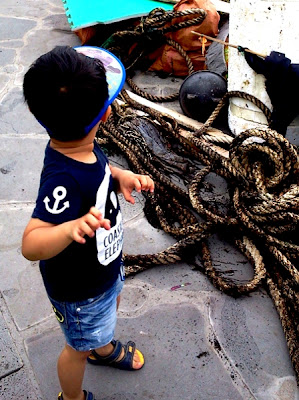 Posted by Skryfblok at 16:38 No comments: Links to this post

Busy, but in a good way

Three weekends ago I went to Mokpo with some colleagues. Last weekend I met up with my writers' crit group and also did paragliding. This weekend I'm going to Jeju Island with the university faculty on the university's expense for three days. In between all of these highlights I've been grading papers. This past week was final exams for the semester. Final grades need to be in next Sunday. In the coming week I'll be partaking in a Taekwon-Do demonstration and also visit my old Hapkido school.

Two weeks back I had a hair cut. A serious hair cut. I mean like a REAL hair cut. It short. Stubble short. I'll upload a photo soon.

Last night I stayed up so that I could Skype with my brother, a close friend, and my grandparents. Went to bed at 2:30.

I'm pretty busy. But in a good way. Still, I'm looking forward to my vacation to start. In the meantime, a little song by Lenka.

Posted by Skryfblok at 19:41 No comments: Links to this post

Posted by Skryfblok at 18:59 No comments: Links to this post

Read my opinion over at Intermedial Notes.
Posted by Skryfblok at 05:18 No comments: Links to this post 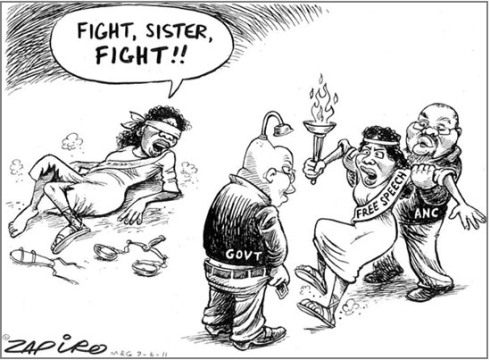 Posted by Skryfblok at 13:11 No comments: Links to this post

After telling my dongsaeng earlier this week about how I enjoyed Broken Valentine's "The sea in my worn drawer", he suggested I look into Kang-San Eh. (Literally translated 강산에 means River-Mountain-At.) And indeed, I enjoyed Kang-San Eh's sound. It has that groovy rocky, jazzy, bluesy, funky feel that puts you in a good mood. I still need to listen to more of his music, but here is a small selection of songs I like so far. The one thing you quickly learn about Kang-San Eh is the wonderful diversity in his music.


Posted by Skryfblok at 08:13 No comments: Links to this post

Classes for Next Semester 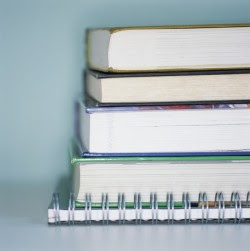 (Image Source: University of Texas at Austin)
I've received the list of classes I will be teaching next semester:

Of these classes, I have not taught Practical English Writing before. I'm planning to structure the syllabus around different types of writing, such as different types of letters (invitations, business letters, promotional letters, etc.); informal writing such as emails and blog entries; contextual writing, like film reviews, restaurant reviews, travel journals; and also attempt some creative writing, possibly focussing on simple poetry or very short short-stories.

19th & 20th Century American Poetry got cancelled last year. I will try and sell the class better this year and will not freak out the students with talks of many essays, thinking for themselves, heated group discussions, and all the other things I told them last year. Instead, I will surprise them with these after the date for dropping classes has passed.

I also enjoy the Presentation class a lot. I've taught it enough times for it not to require tremendous preparation and since the students have to give presentations frequently, it doesn't involve to much (paper) grading, which is a blessing considering that I'll have two writing classes.

I look forward to next semester. Now, I just need to get through the final exams next week and the heaps of grading that awaits me in the weeks to come.
Posted by Skryfblok at 04:32 No comments: Links to this post

Curious about how Korean pop music sounds these days? The following is typical of the genre at present: "Break Down" by Kim Hyun Joong, featuring Double K.

True, these K-pop guys can dance, but personally I prefer Korea's (alternative) rock scene better. Here's Broken Valentine with "내 낡은 서랍속의 바다" ("The sea in my worn drawer"). The song was originally performed by Panic.

Posted by Skryfblok at 18:20 No comments: Links to this post

How to Fall in Love with the Heavens

Posted by Skryfblok at 09:50 No comments: Links to this post

I just reallised that my previous post in which I embedded a music video of Peggy Sue was the 1000th post since I started this blog in September 2008.

Here are some statistics about this blog some of you might find interesting. I don't have an exact figure for the total page views received, but since Google started tracking page views in June 2009, the blog has had over 90, 000 views. The highest month was March 2011, with just over 11, 000 views for that month alone. A possible reason for this is the earthquake and consequent tsunami that hit Japan. May 2011 received just over 10, 000 page views. I can't really say what the reason for that is -- maybe my comments on Osama Bin Laden's Death or my quasi-exposition of Lady Gaga's "Judas." (We know it is a strange world we live in when the alleged death of a terrorist and the controversial song op 'n pop star can both vie for most newsworthy / interesting information.)

The original Kakashi Hatake post in which I announced his death is still the most popular, with currently nearly 23, 000 views alone. It seems to be one of Google's preferred pages for searches on images of Kakashi. The post on physical differences between Koreans and Caucasians (approximately 4, 800 views) has surpassed other frequently visited pages like the Andy Lau and Giraffe Sex posts. Another often visited page is the gallery of body painting pictures. Admittedly, the most popular posts say very little about me -- it merely illustrates my random ponderings.

The blog is extremely varied in topics, but there are clearly some themes I revisit frequently. According to my list of tags, the three most frequent topics I blog about are Korea, Music and South Africa, in that order.

As for visitors, most visitors are from America. The second most frequent visitor region is South Africa. I think that the American visitors are more accidental (Google just happens to refer them), while the South African visitors are more likely to be family and friends in South Africa. That is nice to know, for ultimately that was one of the major reasons why I started the blog, to keep my family and friends abreast with my life in Korea. None the less, I'm appreciative of all visitors, especially the oft returning visitors. About 10% of all visitors are returning visitors. While most visitors that arrive here leave immediately, about 3-4% stay for about 180 to 600 seconds. That is more than enough time to read one or two posts. I'm assuming these 3-4% are my loyal readers -- friends I know, and some "friends" I'm not familiar with, but whom find something of value to return and stay here for a while.

Thank you for visiting and sharing over a 1000 posts so far.
Posted by Skryfblok at 05:50 3 comments: Links to this post

Posted by Skryfblok at 03:49 No comments: Links to this post